Let your voice be heard and leave us your thoughts on our singing telegram services offered by Abash Entertainment.

I called Pam at 8:40 in the morning hoping they’d be able to pull off the greatest prank of all time on my husband on our anniversary which happens to be on April Fool’s day. She was able to make it there on short notice and did a fantastic job. My husband’s coworkers were just as surprised as he was. They all thought she was a senile bag lady. Her jokes and come backs were amazing. The acting was superb! I couldn’t have asked for a better job. I had somewhat of an idea and she took it and ran! I told her a few details about my husband and the look on his face when she brought those up in their conversation was priceless! Highly recommend! Worth every penny and then some! 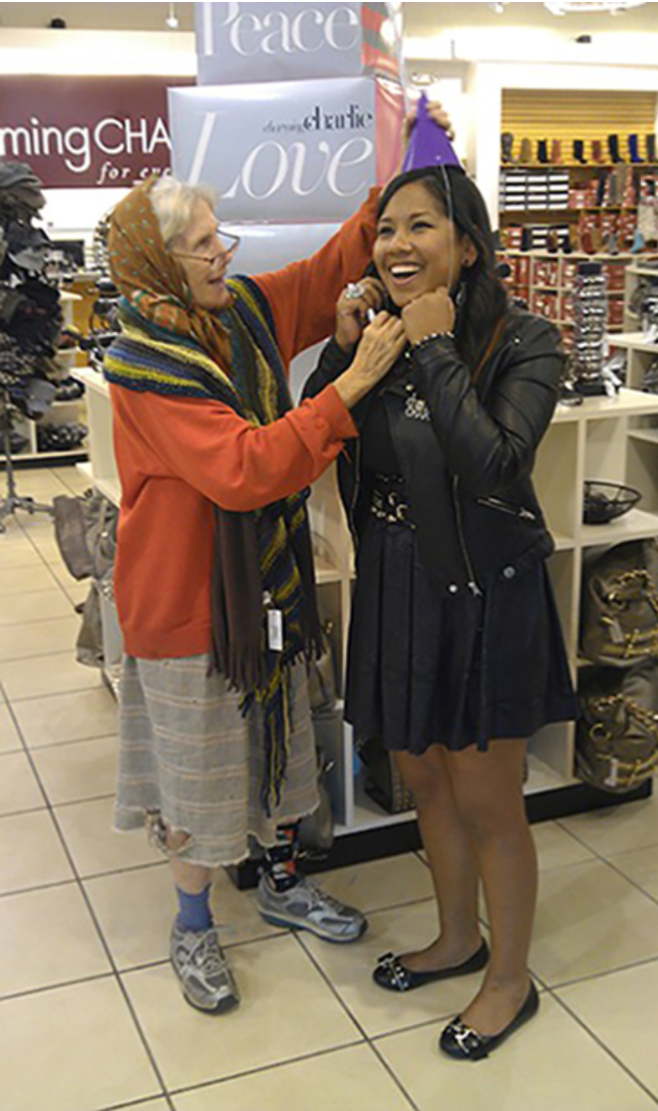 Hi Pam,
I wanted to thank you for the wonderful job you did at my friends birthday bash. I was impressed that we could have a “family” event since we would have our small grandchildren and also teenagers at this event. The “Bag Lady” was perfection and everyone commented on the perfect entertainment for the group. I laughed so hard when our family and friends didn’t have any idea what was happening when you showed up. Even while you gathered your plate of food and fit into the crowd, they didn’t notice until the whispers started getting louder as to who this newcomer was that attended the party. It couldn’t have been done better and with more grace. I will keep your information for future use and look forward to “inviting” you again. Thanks, again, Pam for a perfect evening.

Karol Fletcher Fairmont Travel
Best singing telegram ever! Pam responded to a last minute request and was flexible, timely and a spectacular surprise! The best bag lady performance!!!! Pam stayed in character,had some extremely funny material she added to the performance and created a beyond memorable experience for the birthday guest! If I could give her 10 stars I would.
Desiree Demonbreun
I thought it may be interesting to try something new for my wife’s birthday. What is more unique and entertaining than a crazy bag lady asking you questions about your family while you are trying to work? A crazy bag lady asking you questions and dancing while you try and work! Simply hilarious!
Justin Duplantis District Manager Barbizon USA
This is a great company! I hired Pam for two different events and she knocked it out of the park both times. I highly recommend this company and will definitely use them again.
Dawn Smith Chapman Jamail Real Estate, Inc.
I needed something to make up for the wrong I did to my ex and Pam was just the right person to go to. Pam dressed up as a gorilla and carried my note and ring to my ex telling my ex the joke about how she ran into me at the zoo, and tried to date me but that I already had the gorilla of my dreams. My ex told me about 6 to 7 of her coworkers dropped everything they were doing to watch and some even filmed it. My ex told me that people were laughing and that she was thankful for a once in a lifetime experience. Pam, because of you, things are recovering quickly in my relationship with my ex such that we are talking a lot more than have ever since the break up and thank you. I will most likely use your services again for my son. My son would just be blown away with Mickey Mouse showing up to our doorstep.
Chris Boyd

A couple of weeks into December our office brought in a surprise Ms. Clause for one of the directors in our company. It only took a few seconds before the entire trade floor was surrounding Ms. Clause & him entirely amused by her witty comments & hilarious role play. The fact that it was a complete surprise, having an old & unattractive looking Ms. Clause come in & ask to sit in his lap was funny enough, but when she began spouting out some work habits, favorite teams, & places to go he knew she was here for him & he enjoyed playing along. I was so impressed that I hired Pam to surprise my boyfriend the next week as an early Christmas gift. The entertainment in the office was well worth it & I appreciated that she was very tentative to what I wanted to happen w/the scenario. She even negotiated the price to be more affordable. Having her was a real highlight to Christmas 2012!

Charlotte Frost
Pam, I just wanted to let you know everything went well on Saturday. Jake was perfect and did a great job….everyone loved the surprise!

Thanks so much for your help!
Merry Christmas!

Linda A. Ray Branch Administrator — Houston Administration
The service and act was fantastic and I have used the Bag Lady, police woman, and dancing pregnant nun for all three, work leaving functions. Each act was very popular with not only the people at the function but also with groups around. I highly recommend this act to embarrass co-workers and add great fun to work leaving functions.
Lisa
We hired Pam Adalian to dress like a railroad worker and come entertain our entire office for the Big Boss’s Birthday. Not only did she learn the railroad lingo and dressed the part she had our entire office rolling in laughter. Most definitely would recommend her for any job performance.
Shannon Neal
I had Pam to come out to play a joke on my older brother at work on his birthday and what a performance she gave!!! She punked my brother like I had always wanted to, but never had! She was AWESOME! He bought the joke hook, line and sinker. His face was PRICELESS! Everyone in our office took her number for their special occasions. Thank you Pam for the most memorable birthday bash EVER!!
Miki Edwards
Put this as the next testimony- Hilarious!! She knew everything about our birthday boy to the point where he got nervous and thought he really knew her. I would have her come again at the next chance I get!!
Lauren Garcia
She absolutely loved you. She hasn’t stopped talking about it all day. Thanks so much.
Cory
Thank you again and again for going out of your way to make this happen today. I saw a video and it was awesome! You are amazing and I love your personality. It was perfect for him.
Courtney
Pam,
The Marilyn Monroe impersonator you sent to our party was fabulous in every way. She not only looked like her, she talked like her, sang like her and had her mannerisms. The 70 year old birthday guy was dumbfounded when he saw her standing there in his living room. He thoroughly enjoyed the experience. She is very professional and I wouldn’t hesitate recommending her in the future. Thanks for recommending her!!
Priscilla Culberson
Marilyn was a big hit at my husband’s birthday party. He was surprised and delighted to have her sing happy birthday to him. She was great with all the guests by being very patient and she enthusiastically posed for pictures with everyone. She was so much fun! I highly recommend this lovely young lady.
Donna L.
The Frickin’ Chicken was a wonderful treat for my wife’s birthday. The Chicken was funny and had memorized numerous facts about my wife. I highly recommend the Frickin’ Chicken for your next birthday!
Byan Small
You were fabulous. He’s crazy. Even my co-workers said you were great. Thank you. I’ll keep your name and number and pass it around. Thank you again. They all said it was perfect.
Amy
I hired Pam from ABASH to come to my office dressed as a “Bag Lady” and surprise a co-worker for his 50th birthday. She was awesome! Very funny for the whole office – I recommend this show to anyone.
Bob Hayworth
Since my mom loves Elvis, we decided to have her be serenaded by the King himself! Not only was Pam able to set up the appointment for the next day (I called less than 24 hours in advance), but also she made sure that everything was prepared for a spectacular performance! She called up on of her several Elvis performers and scheduled the show as I was on the phone! After scheduling, I was able to give a list of song requests to Pam for “Elvis” to sing. Later that evening, Pam was kind enough to follow up and say that while “Elvis” didn’t know a couple of the songs (e.g. my mom loves Guadalajara…a song Elvis covered in a movie once…but definitely an odd song that, considering Elvis’ body of work, an entertainer couldn’t be expected to know), but otherwise all the favorites were a go!

He called me the morning of the performance to confirm the time, and kept me abreast of his traffic situation (at first I was running late and then Greg ran into some traffic, but we kept each other up-to-date via the cellphone). With a good deal of sneakiness of my part, I managed to get Greg into the house and all set up without my mom suspecting anything (she was in the other room watching TV). Greg came fully prepared, with a full stereo system set (controls, laptop for the music source, and speakers) and was able to set it up by himself (although I did offer to help carry things in). While he did not arrive fully in costume, once he changed, Greg really did look like the King! The performance was more than I had hoped for–my mother was flabbergasted and ecstatic at the idea of being serenaded by Elvis and Elvis’ vocal talents were excellent. Although not a 100% match for the King, Greg certainly could do justice to some of Elvis’ best songs (Blue Hawaii, Are You Lonesome Tonight?, Blue Christmas, Don’t Be Cruel, Love Me Tender, (Let Me Be Your) Teddy Bear, and All Shook Up among others). It was a wonderful experience and a birthday that my mom will remember forever! I’m sure all the other Elvis impersonators at A Bash Entertainment are good as well, but if you’re going for Elvis, definitely ask for Greg!

Cheers Rebecca
My 44th birthday was awesome. My husband has always surprised me for Valentine’s Day with cupid and a frog. This time he used singing telegram Houston Ms. Pam. She did this chicken routine and had my entire life all rolled into her skit i couldn’t believe it. My family was excited and had never seen this done but on television. I enjoyed my party even more. Thanks for an awesome time I will never forget.
Risha S.

Pam, you hit it out of the park at my nephews couple shower. The Bag Lady was so believable and hysterical. Everyone still talks about how funny the “Bag Lady” was. You were also a hit at my friend’s birthday party. You had everyone believing you were a Bag Lady. After several parties with the Bag Lady, there isn’t anything that can top it. I look forward to the next party with The Bag Lady involved. Thanks so much for the laughs!

Sanette
Thank you. You were hilarious. Great present to a guy who only wanted a good laugh for his birthday.
Brenda

Send your thoughts out through a song number with our singing telegram. Don't let that special occasion go by send a singing Skype O Gram.